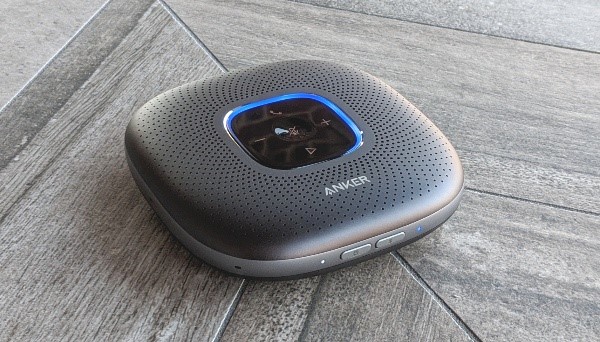 REVIEW – In recent months, I have been making Zoom calls to keep in touch with people – something I’ve never had to do before. My laptop’s speakers and microphone are not the best, and once while on a Zoom call, the person I was talking to told me that I sounded like I was speaking through a tin can. I decided that since I will be doing more Zoom calls in the future, it was time to get a speakerphone. The Anker PowerConf Bluetooth Speakerphone looked like it would fit the bill.

How did I like the speakerphone? Initially, I thought it worked well. It eliminated background noise and made the caller sound excellent through the PowerConf speaker. The microphones were able to detect voices from a radius of at least 13.5 ft. away.

But then upon further testing, its limitations became evident. When a group was using the speakerphone, while conversing, their voices trailed off at the end of their sentences. When this happened, I could hear some digital distortion of the audio. I also heard digital audio distortion when people with lower voices were speaking quietly.

There were other issues as well. For instance, there was a slight lag between the live video and audio when using it with our iPad but not our Android phones or laptop. And on a rare occasion, you could hear some background noise even while people were speaking into the speakerphone’s microphones.

Even with these drawbacks, the speakerphone does allow you the flexibility to place it unobtrusively in a central location away from the device it is connected to have more productive conference calls, and it is able to pick up voices in a 360-degree area around the speakerphone.

The Anker PowerConf Bluetooth Speakerphone is a device that improves the quality of your device’s microphone(s) and speaker(s) when conducting conference calls. It does this by connecting to a phone, tablet, laptop, or computer via Bluetooth or USB cable. The PowerConf contains a speaker as well as six microphones around its perimeter. The microphones detect up to eight voices in a room within a 5 m radius of the speakerphone so that the caller can hear everyone clearly and vise versa. 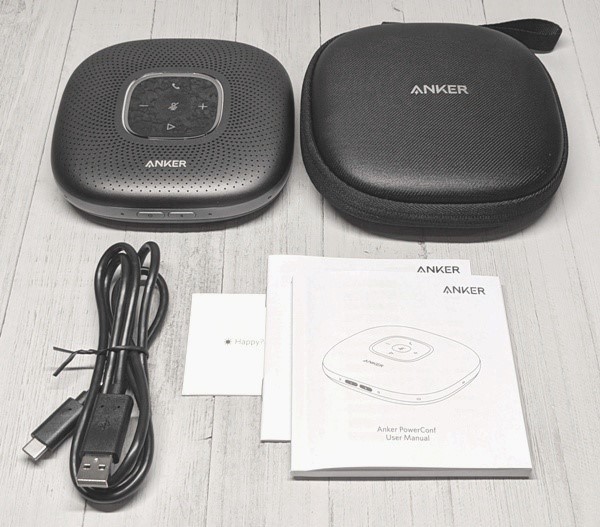 The Anker PowerConf Bluetooth Speakerphone is well-designed. It measures 5″ L x 5″ W x 1″ H, is made of metal, and has a good heft to it.

The top of the speakerphone shows its speaker and touch control panel (starting from the top and going clockwise): The Answer Call/End Call button (long-pressing rejects a call), the Volume Up button, the Play/Pause button, the Volume Down button, and the Mute button (center).

There is an LED status light ring surrounding the control panel. The following are the status light meanings:

The bottom of the speakerphone has a silicone pad to prevent the speaker from moving around or scratching furniture as shown in the last photo above.

The sides of the speakerphone display the rest of the microphones.

At this point, you can download the Soundcore app by Anker to update the PowerConf firmware (NOTE: you do not need to download the app to use the speakerphone). To use the app, you need to create an account by providing your email address and entering a password; after which, they send you an email that contains a link that you need to click on to activate your account. When I submitted my information, I did not receive my email for quite a while – it showed up a day later in my Spam folder.

After I activated my account, I tapped on the speaker icon in the app homescreen and then scrolled down the screen to tap on the “More” section of the app, which is where I found my PowerConf device. I then tapped on the PowerConf and selected “Multi-Person Mode” (as shown in the center screenshot above). Next, I tapped on the horizontal three dots located in the upper right of the app screen, and last, I selected “Update Firmware” to perform the update, as shown in the last screenshot above.

Now I was ready to use it!

The reason to use a speakerphone is to improve the microphone and speaker functionality of your current devices so that everyone involved in a conference call can hear everyone else. Thus, I tested the Anker PowerConf Bluetooth speakerphone with three of our devices: our iPad 7th gen 2019 tablet, my Pixel 2 XL phone, and my Lenovo laptop.

Initial tests with the PowerConf connected to iPad 7th generation 2019

First, I paired the PowerConf with our iPad and then used Zoom and Microsoft Teams apps on the tablet to talk to others. The top of the speakerphone has a reasonably responsive control touch panel. However, there were a few occasions where I had to touch the Volume Up and Volume Down buttons a few times to get it to adjust the volume level (NOTE: the Mute button on the speakerphone does not work with Zoom calls).

Next, I wanted to determine the quality of the PowerConf speaker and microphones. In my initial tests of the speakerphone with my devices, I found that the speakerphone worked well. When paired with our iPad, it was easily able to pick up the two voices in the room (it can detect up to eight voices in a room, according to the documentation) from a distance of 13.5 ft. away from the speakerphone (Anker states that it will detect voices within a 5 m radius).

Additionally, people who were far away from the speakerphone sounded almost as loud and clear as those who were close to it. And it did a decent job of canceling out the ambient noise which we tested inside the house using a vacuum cleaner and outside the house where there was traffic noise.

While using this setup, I did notice that there was a slight delay in the audio when doing a live video call. However, this audio-lag issue has been a consistent problem that I have had with our iOS devices when pairing them to many kinds of Bluetooth speakers or headphones.

Initial tests with the PowerConf connected to Android phones

Next, I used the PowerConf with our Android phones. When using only our phones’ speakerphones, callers often sound terrible. But after pairing them with the PowerConf’s speaker, the person on the other end of the call was coherent and unmuffled.

Also, while I was speaking to a caller, the Anker speakerphone picked up my voice no matter where I was positioned. Whereas, if I used my phone’s microphone, I had to be in a position to speak in the microphone’s direction, especially when the phone was lying flat on a surface.

And good news! There was no lag between the audio and video on a Zoom call. On a couple of rare occasions, however, ambient noises were heard while on a call, but it is important to note that the caller could still hear my voice clearly.

Initial tests with the PowerConf connected to Windows 10 laptop

Last, I used the PowerConf with my Lenovo laptop. The Anker speakerphone worked well and picked up voices in the room from many feet away, and the audio sounded excellent on the PowerConf speaker. Furthermore, there were no audio delays in video calls.

Upon further testing, I discovered some issues. I passed on the PowerConf and iPad to a group of people that I was going to be Zooming with. While they were on a video call with me (I was using our Windows 10 laptop), the PowerConf’s microphones picked up all of their voices. However, I heard digital audio distortion when their sentences trailed off. It also happened when those with lower voices were speaking quietly. This was very disappointing. The sole reason for using the PowerConf is to be able to hear a group of people clearly during video calls.

Even though I had these problems, the speakerphone does allow you the flexibility to place it unobtrusively in a central location away from the device it is connected to have more productive conference calls, and it is able to pick up voices in a 360-degree area around the speakerphone.

Some of the other features of the Anker PowerConf Bluetooth Speakerphone are that it has a 6700 mAh battery, you can use the speakerphone to listen to music, and it has an auto power-off feature. The 6700 mAh battery allows you to use it for 24 hours of talk time, which is pretty phenomenal. I did not test this – I can be quite the chatterbox sometimes, but not for 24 hours straight! The battery charges in about four hours, according to the documentation. Additionally, you can use it to charge your devices using the USB-A power-out port on the back of the speaker.

And last, the PowerConf speakerphone has an auto power-off feature that is set by default to power off in 30 minutes when not in use; however, this can be changed in the Soundcore app. Auto power-off only works when connected via Bluetooth and not USB.

Initially, I was impressed with the Anker PowerConf Bluetooth Speakerphone; but after further testing, I was a bit disappointed. It seemed to initially work well when paired with my iPad 7th gen (2019), my Pixel 2 XL phone, and my Lenovo laptop, probably because we were testing for only a short time, and we were all sensitive to the fact that we were speaking into the speakerphone.

In those initial tests, the speakerphone’s six microphones detected voices in a 360-degree area around a room. It made each person sound almost as equally loud and clear as the others when they were at varying distances (up to 5 m) while also canceling out ambient noises most of the time. And the PowerConf speaker significantly improved the quality of the caller’s voice when compared to our phones’ or laptops’ speakers.

Additionally, I noticed a few times that the touch panel controls sometimes needed a couple of taps to respond, and the speakerphone had some minor audio lag issues when doing a live Zoom call on our iPad. Also, on a few occasions, I could hear background noise when people were speaking.

The PowerConf does have some perks. When it works, it’s wonderful – you just have to remember to keep your voice at a normal volume level at all times (you don’t have to scream at the speakerphone). It’s also small and portable and comes with a handy travel case that allows you to take it with you everywhere. Furthermore, it allows you 24 hours of talk time because of its massive 6700 mAh battery, and the battery will allow you to charge your devices in a pinch.

Price: $99.00
Where to buy: Amazon
Source: The sample of this product was provided by Anker.